Retaining Not Knowing: Work in progress and work yet to be made

A group of three modroc rocks. The face of the largest is shaped like a tarot card. There is a hole in the surface out of which grey plaster forms appear to have tumbled.

I struggle to articulate these rocks, what it means for them to be almost theatrical, like stage props for a community production. However, I have felt the need to work with my hands, to turn away from the digital, and be more physically present with and in my work. On the surface of the rocks, you can almost see where my hands have been, where the grey plaster has been wiped across before setting. 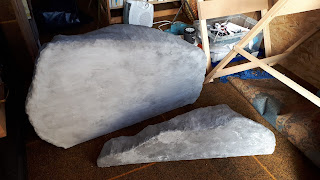 The largest of the rocks is shaped in a particular way, an echo of blank tarot cards in another piece of work. Tarot, a form of divination. In the film the blank cards are being dealt and turned over. Outwardly, or perhaps at first glance, the cards appear to tell you nothing. In the case of this rock, I also think of blank stone tablets waiting for language to be inscribed upon them. 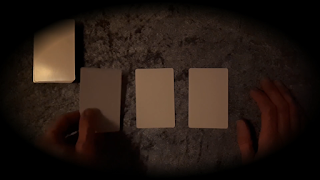 The forms that tumble from this rock are a borrowed shape. Durer’s solid as depicted in an etching titled Melancholia 1 from 1514. This form was gifted to me by my crit group. We had been talking about mysterious or unknowable shapes. The image is full of symbolism, but the story of the rock is still uncertain. 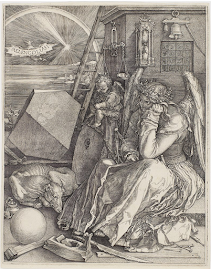 There are theories that Durer’s choice of angles is linked to calcite crystal formation. Only any recorded mathematical study of crystals didn’t start until well after Durer’s death, so this is contested. The forms have an odd way of appearing different, varied, but in reality, they are all from the same mould. The best of these forms are streaked with black, like striations. 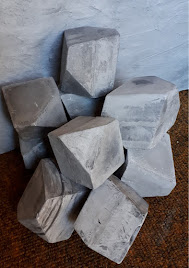 I keep mulling over at what point geology entered my practice. A flint, a silhouette of a rock, a rocky outcrop on a hill? My work has taken a turn towards the occult which I am wary of and I feel myself drawn to the permanence of stone as a way of grounding. Of situating myself in the in between, between Charles Kingsley’s inductive reasoning and something more allusive or permanently not knowable. 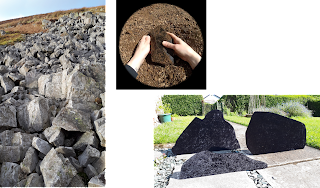 Popular posts from this blog

June 23, 2017
Residency Information If you would like to know more about the Immergence/Emergence residency please see the below links. (I am learning that it’s okay not to spend time duplicating information in my own words when the information is already out there): Residency launch: https://www.cumbria.ac.uk/study/academic-departments/institute-of-the-arts/immersionemergence-artists-residency/ Residency shortlist announced: http://www.cumbriacrack.com/2017/03/31/immersionemergence-contemporary-art-residency-shortlist-announced/ Residency winners announced: http://www.itv.com/news/border/2017-05-09/university-names-winning-artists-to-reflect-on-storm-desmond/
Post a Comment
Read more

January 28, 2021
1. Feeding the Knight of Pentacles Reaching across to the shelf I pick out the usual two tins. One for her and one for him. I turn, select an apostle, dig out the oddly smelling meats and serve them into two bowls.  Picking up the syringe I draw 1.5ml of sugary sweet liquid out of the jar sitting on the sill. I squeeze it upon her meat. His meat gets placed on the floor near the bin. She races forward on through the door ahead of me.  She’s needy, requesting hand feeding. Licking at the sticky liquid and meat slipping through my fingers. Bit by bit she slowly eats, and even more slowly starts to shift and change. From small and sleek, to tall, leggy, and strong. A stead before me like those of legend told at bedtime. We’ve been together a long time; this moment has been in our dreams. Without a sound I know what to do. I reach up grasping between shoulder blades and pull myself up across her back. She is getting old and no longer has the ability to travel very far. Th
Post a Comment
Read more